Listen to a video interview of Dr. Poinar about his latest discovery.

When entomologist George Poinar, Jr. wore a Halloween mask depicting the weird, alien-looking head of the new 100-million-year-old insect that he found preserved in amber, it frightened the trick-or-treaters who came by his house so much that he had to take it off. 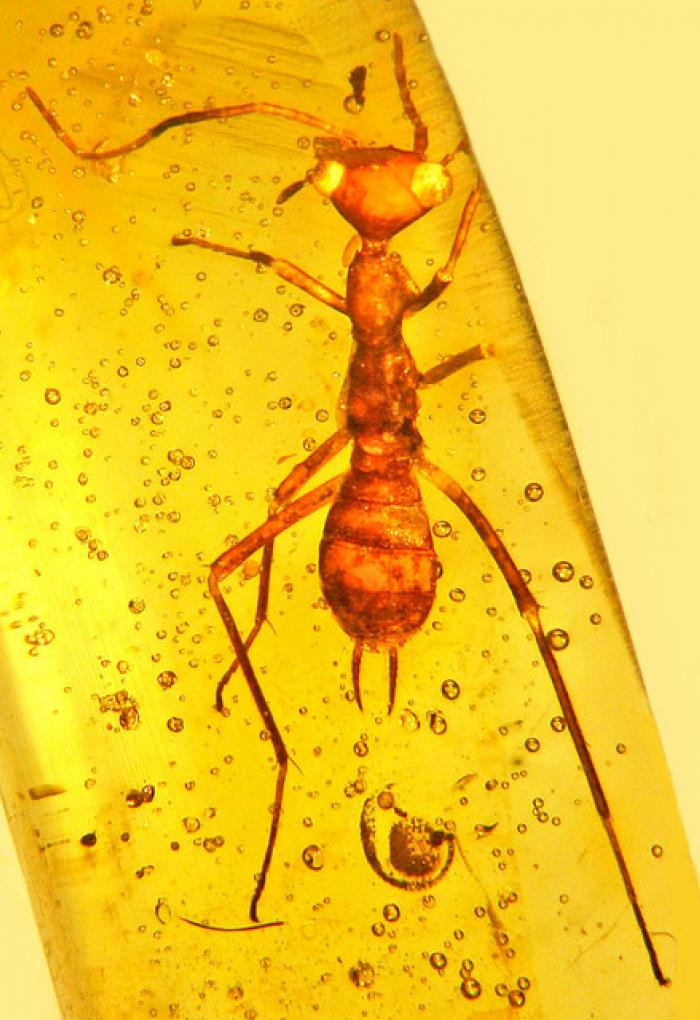 The insect, a small, wingless female that probably lived in the bark of trees and scavenged for mites, worms and fungi while dinosaurs lumbered past, has features so bizarre that it called for the declaration of a new order, Aethiocarenodea, an incredibly rare event given that until now there were only 31 orders classifying the one million described species of insect. Now there are 32.

The insect’s unique feature is her head, an isosceles triangle with bulging eyes, allowing her to swivel her gaze 180 degrees because it is attached to the neck at the apex (while many other insects have triangular heads, they are attached to the body along the long, base edge, not the apex).

Long extinct and preserved in amber like the fabled specimens In Jurassic Park, the insect, probably an omnivore, also had a long, narrow, flat body and long slender legs. It could move quickly and literally see behind itself. It also had glands on the neck that secreted a deposit that scientists believe most likely was a chemical to repel predators.

The insect has been assigned to the newly created order and named Aethiocarenus burmanicus, in reference to the Hukawng Valley mines of Myanmar—previously known as Burma—where it was found. Nobody knows why it disappeared, but loss of preferred habitat is a possibility. Only two specimens of the new species have been located.

“The strangest thing about this insect is that the head looked so much like the way aliens are often portrayed,” Poinar said, who is has a courtesy faculty appointment in the Department of Integrative Biology. “With its long neck, big eyes and strange oblong head, I thought it resembled E.T.”

Poinar, the original scientist who inspired the Jurassic Park book and movies and popularized the idea of extracting DNA from insects preserved in amber, has been the lead on many discoveries of ancient fossils over the years that have challenged existing taxonomies, including flies with horn-like protuberances from their heads, an angiosperm Myanmar flower with no association to any known families, and an ancient bee with some ancestral wasp features.

Based on an article by David Stauth.

GEORGE POINAR, JR: Poinar earned his bachelor, master's and Ph.D in biology from Cornell University, which he completed in 1962. He conducted much of his research at the University of California, Berkeley in the Department of Entomology's Division of Insect Pathology. He studied the axenic culture of nematodes, nematode parasites of insects and the fossil records of insects and nematodes in amber at UC-Berkeley. In 1995, he moved to Oregon with his wife and lifelong collaborator Roberta. They actively continue their research, traveling around the world. Poinar is 80 years old.