Riding a torrent of innovation and collaboration, senior researcher at Hatfield Marine Science Center (HSMC) Sarah Henkel will set sail on the Pacific Ocean not just with her research team, but with an artist, recent fine arts graduate Abigail Losli (BFA, ‘16).

The research cruise is remarkable for yet another reason: it is an all-female scientific crew. Besides Henkel, other members of the research cruise include post doctoral scholar Lenaïg Hemery, doctoral student Maritza Mendoza, and undergraduate students Brittney Bair and Anna Le, who is also the National Science Foundation’s Research Experiences for Undergraduates (REU) intern on the project.

“I am excited about having a diverse, all-women science team: Lenaïg is French, Maritza is Mexican, Brittney is American and Anna is Asian-American. We didn’t even plan it. It represents an awesome advancement for science,” said Henkel. 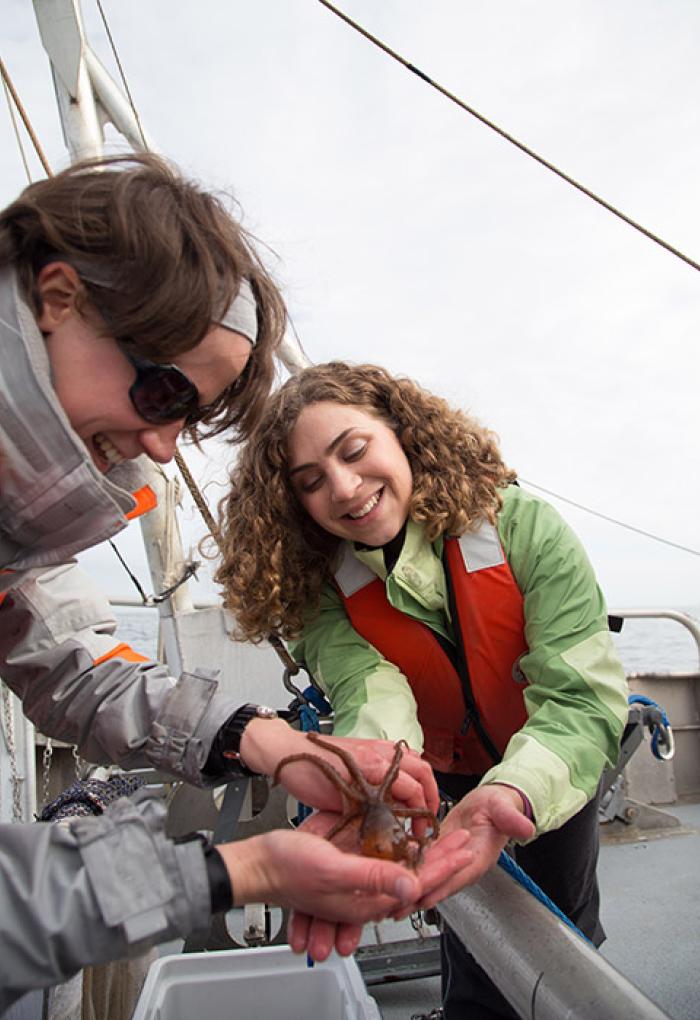 This four-day scientific expedition on R/V Pacific Storm is one of the first exciting ventures of the cross-disciplinary Marine Studies Initiative (MSI) at Oregon State University. Henkel is a member of the ambitious and far-ranging Marine Studies Initiative that uses a new teaching and research model with unique experiential learning to increase understanding of coastal and ocean systems and promote sustainability.

MSI involves collaboration from students, faculty, government, industry partners and others across higher education to tackle challenges facing the ocean, coastal communities and people who depend on a healthy, thriving marine environment.

But innovative research collaboration at sea on the Pacific Storm goes beyond science. It intersects both art and science and is the first of many programs that will comprise “Spark: A Year of Art and Science,” a year-long series of special events celebrating the blending and blurring of boundaries between art and science at Oregon State University throughout 2016-2017.

Henkel has been passionately involved in the discussions and initiatives around expanding the notion of marine studies beyond science so it didn’t take long for her to suggest inviting an artist to join the team on the research cruise.

“There was extra room on the boat and I thought “Let’s get started on the MSI right now!” said Henkel.

The idea, as Henkel explained it, is to open up opportunities for people from other disciplines to explore and gain an appreciation of the ocean from a different vantage point.

“It is always rewarding to have an outside perspective on your work. A couple of months ago, I had engineers on the boat. They saw two sample sediments collected from the sea floor. It was great to see their wonder and amazement,” Henkel said.

After a flurry of emails to journalism and liberal arts professors, Henkel connected with Abigail, a talented young artist whose water series—a set of 100 vivid panels depicting moving water— was garnering much excitement, attention and appreciation across campus.

Abigail met Henkel and the research crew for the first time at the Hatfield Marine Science Center just a few days before the June 20 trip set sail.

“We are both excited about spending the week together. I am very open to Abigail’s artistic possibilities here, what she will produce out of the cruise and what will be done with it,” Henkel said.

Microbiology department head and professor Jerri Bartholomew, who is one of the architects of “Spark, A Year of Art and Science,” said the goal is for the artist and the scientist to find a medium to document their collaboration, which will be highlighted in a show at the crossroads of art and science at OSU that will capture the breadth and fluidity of the disciplines.

Surveying the depths of the seafloor

The five-member research cruise led by Henkel is sponsored and funded by the Bureau of Ocean Energy Management (BOEM). The four-day cruise on the R/V Pacific Storm is part of a large study to characterize the sea floor in preparation of offshore wind energy installations.

In the Pacific region, BOEM is “responsible for managing the development of conventional (oil and natural gas) and renewable energy resources (Wind and wave) and mineral resources on the Outer Continental Shelf offshore California, Oregon, Washington, Hawaii in an economically and environmentally responsible way.”

Henkel’s project involves collecting box cores (sediment grabs) to analyze the organisms to do habitat classification of the seafloor, and will help BOEM “predict, assess and manage effects from offshore energy and marine mineral exploration, development and production activities on human, marine and coastal environments.” 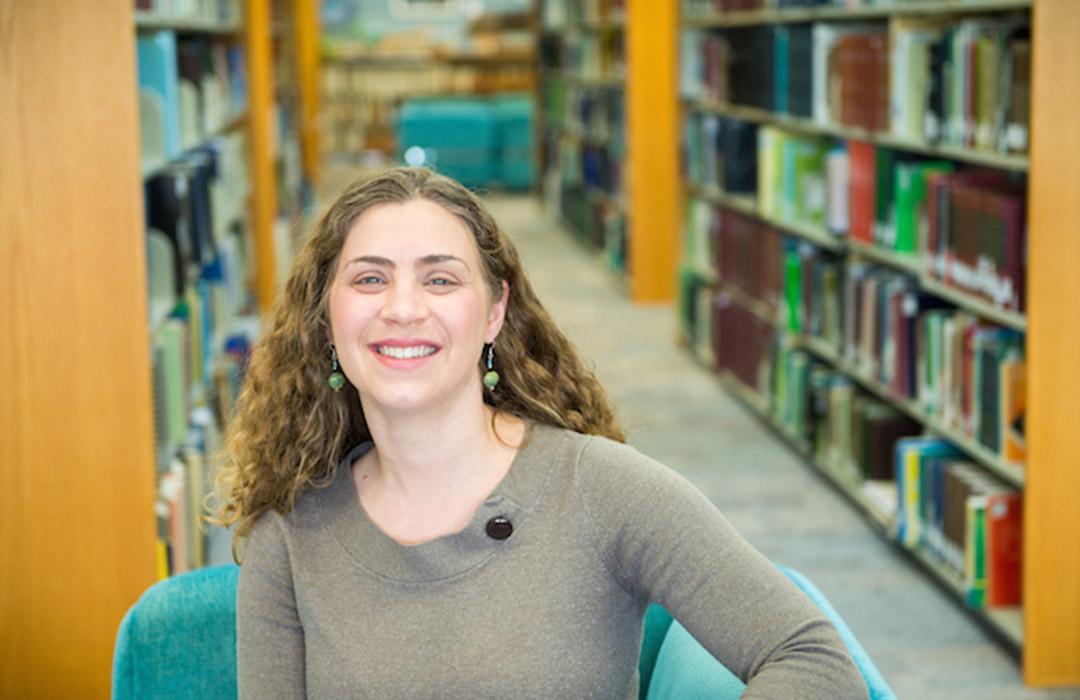 “In order for BOEM to grant or refuse a lease, they need a good idea of the habitat and the organisms that would be affected by the installation” said Henkel.

After commencing their journey in Newport, Henkel and her team will collect samples from the outer continental shelf (OCS), which refers to all submerged lands lying seaward of state coastal waters (3 miles offshore) that are under U.S. jurisdiction. Once the crew reaches their destination in Coos Bay, they will take a higher density of samples since that is an area currently proposed for offshore wind energy development.

On the return journey, the researchers will collect samples from deeper on the continental slope. Although the distance between Newport and Coos Bay is around 77 nautical miles, the four-day period will allow the team to collect nearly 50 seafloor samples.

Henkel’s team will send down a box core and it will pick up the sediment and all the animals on a spot on the seafloor. The seafloor samples typically contain different sediment grades, such as gravel, sand, mud or clay and whichever organisms happen to be living there. After a sub-sample of sediment is retained for analysis, the rest of the sample will be placed in a sieve and washed of the sediment to collect all the organisms.

NSF REU intern Anna Le will conduct the initial sorting of the organisms into major taxonomic groups, Henkel pointed out. Once organisms are identified to species, the data will be used carry out habitat classification of the seafloor and develop habitat suitability maps for select species of interest.

“Water connects us all”

Abigail writes of her water series—which was also her BFA thesis: “Examining patterns of movement in water enables me to explore themes of change and rest, while working in series elevates the way parts comprise a whole.”

She graduated recently with a bachelor’s degree in fine arts and a specialization in applied visual arts. Her thesis “Life and Living,” which exhibited at Fairbanks Gallery and West Gallery on campus, is a large series of painted panels depicting patterns of movement in water. Drawn with acrylic paints on birch cradled wood panels, the paintings originated from Abigail’s close observations of moving water daily over a year-long period.

“I have observed moving water anywhere and everywhere—from the coast to the Willamette River, Epsom salt baths in my house, the raindrops on my car’s windshield and the OSU Wave Lab,” explained Abigail.

Given her love of water and her art thesis project, Abigail seemed a natural fit for the R/V Pacific Storm cruise.

“I will definitely be observing the water,” exclaimed Abigail, who has already completed several projects on the coast as part of an arts engagement class at OSU.

“It feels like a good next thing to do after graduation.”

Her art professor Charles Robinson informed her about the project and put her in touch with Henkel. Abigail is thrilled to go on her maiden scientific research cruise. She didn’t fail to notice the warm and spirited team camaraderie during her first meeting with Henkel and her students at HMSC.

“It was a wonderful meeting. They explained their research mission and the kind of work they will be doing during the cruise. I will be open to whatever the project needs.”

This dialogue between art and science on the Pacific is part of an enthralling new wave of scientific and artistic collaborations at OSU. Bartholomew, who is a glass artist and whose work can be found adorning the walls of the Memorial Union, is encouraging artistically talented students in her microbiology lab to forge art-science relationships in bold and creative ways.

One of her students is collaborating with her on a metal/glass sculpture of the Willamette River to be displayed outside Nash Hall based on the latter’s interviews with researchers who have worked on the river.

In another example, Bartholomew’s research intern is producing a piece of art based on her laboratory experiences for a show at the Corvallis Art Center.

Henkel hopes for something similar.

“I just don’t want Abigail to be an observer. I want her to participate in sample processing. I am excited for her to see the sediments and organisms that come up. Most people don’t get to see that,” said Henkel, who plans to include Abigail’s artistic work in her report for publication in the BOEM newsletter.

Abigail is blogging about her ocean adventures and her direct observations of science in action via Snapchat and Facebook.