An evolutionary and population geneticist with strong regional and global impact, Professor Michael Blouin will present the 2021 Gilfillan Memorial Lecture, “What Darwin couldn’t imagine: A personal journey through the ever-changing field of evolutionary genetics.” In his talk, Blouin, a professor in the Department of Integrative Biology, will share his journey as a scientist and explore how research findings in evolutionary genetics can be translated and applied to practical questions in fields from conservation biology to human health.

RSVP for the Gilfillan Lecture (virtual)

In Blouin's talk, slated for Thursday, April 8 at 5:30 p.m., he will explore his more recent work in health, disease and conservation across species, ranging from salmon conservation in the Pacific Northwest to the human infectious disease of schistosomiasis, transmitted by snails, that affects 250 million people worldwide.

Blouin received the College of Science’s 2019 F.A. Gilfillan Memorial Award for Distinguished Scholarship. Originally scheduled to be held in spring 2020, the Gilfillan Lecture was postponed to April this year due to the onset of the pandemic. The award recognizes achievements in science by honoring a faculty member in the College who demonstrates a long and exceptional scientific career with nationally and globally recognized scholarly achievements.

In his 25 years at OSU, Blouin has developed a remarkably broad, distributed and well-funded research program that has spanned molecular ecology and genetics. Since 1991, Blouin’s research has been funded by 35 awards, totaling over $12.8 million, from agencies such as the National Institutes of Health and the Department of Energy (Bonneville Power). 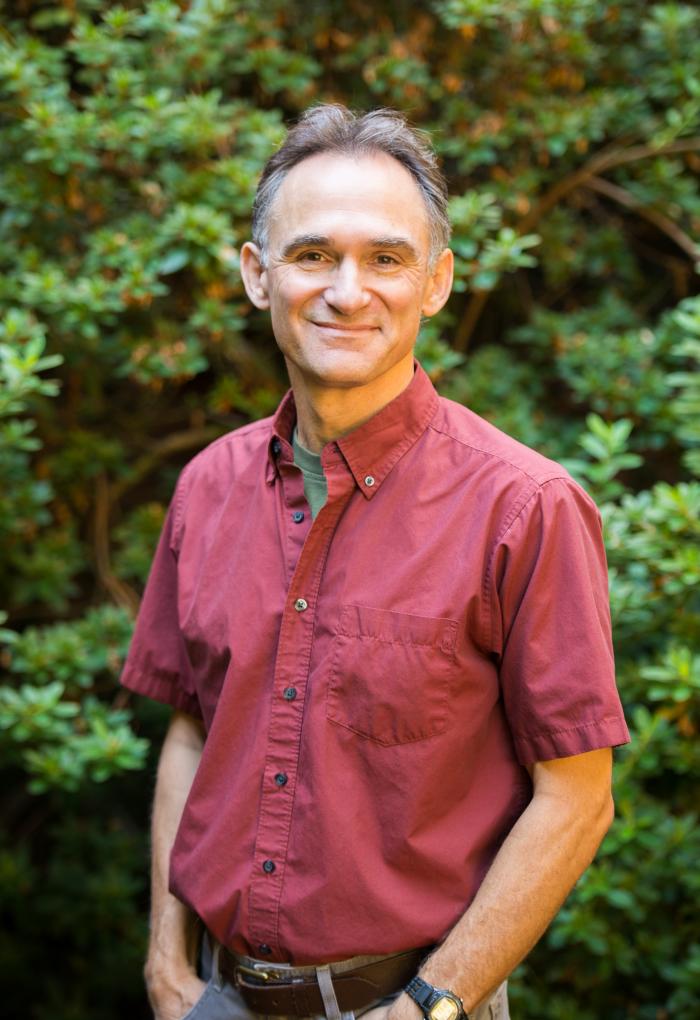 Blouin’s research in the field of evolutionary and population genetics has been broad, spanning the areas of biodiversity, molecular ecology and conservation, using species from a variety of taxa. Blouin has employed cutting-edge molecular and genomic tools to answer previously unapproachable questions in evolution and genetics. These have encompassed immune genes and pathways of genetic resistance to infectious parasites, host-parasite genetics, and the causes and consequences of domestication in hatchery fish.

A large part of Blouin’s work has been to apply genetics to questions in conservation biology. His research during his early years at OSU focused on genetic variation among populations of frog species in the Pacific Northwest. His work on the Oregon spotted frog (R. pretiosa), one of the most threatened amphibians in the Pacific Northwest, was used in the federal listing of the amphibian as an endangered species by the U.S. Fish and Wildlife Service. “We showed that spotted frog populations display very big genetic differences across relatively small geographic distances,” Blouin said. The research identified major genetic groups in the species, making a compelling argument for their evolutionary significance and priority for preservation.

Blouin has also applied genomic and molecular tools to study how salmon adapt to hatcheries. His lab was the first to show that even first-generation hatchery salmon have lower fitness than wild salmon when both spawn in the same river, and that the difference is owing to rapid, inadvertent domestication. This work has garnered substantial media attention and news coverage, including print, web and radio (e.g. OPB Think out Loud Segment, Oregonian, Newsweek.com, Christian Science Monitor, CBC Radio).

“It's a trade-off. They quickly domesticate and that makes them a better species for raising in a hatchery, so you get your production goals. On the other hand, it makes them less fit in the wild, which is contrary to the conservation goals,” said Blouin. His lab is now attempting to determine what traits are under selection in hatcheries, and how one might modify hatchery rearing practices to reduce the rate of domestication.

Early in his academic career, Blouin was also able to combine the areas of genetics and parasitology in his research. As an undergraduate student at the University of Virginia, Blouin focused his studies on an interdisciplinary major. He went on to obtain his master’s degree in the Department of Biology at Florida State University in Tallahassee, and completed his doctoral studies at Florida State, specializing in frog genetics. A postdoc position in a molecular biology lab at the University of Florida led Blouin to a study of parasitic nematodes (human and plant parasitic worms distinct from bacteria and viruses).

“I took the research project in a completely different direction, turning it into a population genetics question,” Blouin said. “That’s the type of question nobody had ever asked of that system before.”

Blouin expanded his work on the population genetics of parasitic worms (nematodes and trematodes) during his early years at OSU, becoming one of the founders of the field of endo-parasite (parasites that live in the tissues and organs of their hosts) molecular ecology. His research employed genetic markers to clarify patterns of gene flow and life cycles in parasites in order to gain insight into their evolution, with practical application in areas such as the evolution of drug resistance.

“Population genetics had not been seriously applied before to the study of parasitic worms,” remarked Blouin. “When you move between fields, you bring ideas that are common and well understood in one field, but are very exciting in a new field because nobody's done that before.”

Blouin is particularly noted for his high impact work on schistosomes, a flatworm that causes the human infectious disease schistosomiasis. Prevalent in sub-Saharan Africa and other tropical countries, schistosomiasis is an important neglected tropical disease that affects nearly 240 million people worldwide. The microscopic worms live in the veins after penetrating human skin and can cause a massive amount of damage to the body. Schistosomiasis is caused when people come into contact with contaminated freshwater in which snails that carry schistosomes are living. The intermediate host snail is the focus of Blouin’s research on resistance to the parasite.

Blouin began his work with snail schistosomes more than a decade ago by collaborating with his colleague Chris Bayne. Having adopted a genetic approach to the research, Blouin applied genomic tools to discover genes in snails that reduce transmission of the parasite.

"Among parasitic diseases, schistosomiasis is second only to malaria in terms of its effects on human health”, said Blouin. “It is a disease of chronic reinfection and loss of ability to work, and it is particularly hard on school children.”

Eventually, Blouin hopes “to break the cycle of transmission by targeting the genetic mechanisms of snails in endemic regions before they can transmit the disease to humans.” Blouin’s findings on key snail genes and how they reduce transmission of parasites have led to a greater understanding and knowledge of this little known branch of parasitology.

Blouin joined OSU in 1995 as an assistant professor after teaching at Sonoma State University and the University of South Florida. He has published more than 100 papers, including in journals such Proceedings of the National Academy of Sciences, Science and Nature Communications. In the course of his career, Blouin has advised eight doctoral students, 12 postdocs and numerous undergraduate students at OSU. His former doctoral students and mentees have gone on to prestigious academic positions at other universities.

Blouin’s Gilfillan talk will use examples from his 30-year career to illustrate how evolutionary genetics can be applied to critically important areas in biology. He will also share how a career in the sciences can be influenced by chance events, technological innovations and the people one meets along the way.