A fellowship introduced in 2019 is ushering in new opportunities for biology and zoology students interested in ecology and field work. The Alexei Lubchenco Menge Undergraduate Research Fellowship, awarded by the Department of Integrative Biology, supports one undergraduate each summer with a $5,500 stipend, as well as a $500 research award, to conduct ecological field research. The goal of the fellowship is to facilitate a transformative learning experience for an emerging scientist and advance OSU research.

The first recipient of the fellowship Kristofer Bauer is a biology senior with an enviable resume in marine biology research. Bauer worked on different aspects of marine biology across four different labs during the course of his undergraduate career. He spent two months aboard a research vessel tagging fin whales, blue whales and humpbacks off the coasts of Oregon and California, conducted genetic analysis of sea stars, monitored species biodiversity in eelgrass beds, studied larval fish ecology and investigated marine invertebrates on rocky shores. Bauer is currently a lab technician in Distinguished Professor Bruce Menge’s Lab where he works under the guidance of postdoctoral scholar Sarah Gravem and Menge.

The fellowship has allowed Bauer to design and pursue his own field and lab research project focused on a study of barnacles and mussels recruitment in rocky intertidal habitats. Recruitment refers to the population dynamics and settlement of organisms on surfaces such as bare, exposed rocks. At the larval stage, barnacles and mussels are active swimmers and just before reaching adulthood they look for a suitable surface to settle.

“I had no idea what a sea star was. My only reference was from watching Sponge Bob on TV. Once I got out working in the field and in the lab, I fell in love with the research.”

Long intrigued by the mechanisms that drive barnacles and mussels to select particular locations on the Oregon coast, Bauer was able to launch an in-depth investigation into what a larval barnacle or mussel takes into account when it lands on a rocky surface.

Bauer put in nearly 60 hours every week on the coast, deploying his field project that entailed drilling in bolts and hardware into the rock, as well as constructing makeshift landing zones for incoming larvae and juvenile organisms to settle on.

“I liked the research problem because the organism is essentially making the most important decision of its life: Where is it going to stop and settle for the rest of its life? What is it looking for when it lands on the rock that helps it determine whether or not the place is safe?” Bauer explained.

Through the course of his undergraduate research, Bauer developed an appreciation for the rich contributions these tiny crustaceans and mollusks make to our environment. “These species are foundational to our coasts in terms of the habitat and food they provide to other organisms.”

While Bauer spent much of his summer just figuring out how to carry out the project, he nonetheless powered on and has come very close to determining an answer of sorts. Through chemical ecology research, Bauer found that young barnacles are attracted to certain surfaces because of the deposition of protein from mussels. Apparently, the latter plays a bigger role in luring barnacles than the bumpiness of the rock surface that affords protection to barnacles from waves and from drying out when the tide is low. “This finding means that mussels might provide some sort of protection or resource that is seen as a reward by young barnacles,” said Bauer, who is conducting further experiments and hopes to publish his research.

From baseball to marine biology

Aspiring to go to graduate school to continue his studies in marine biology, the senior biology major has charted a very different course for himself than the career path he had planned in high school. Bauer grew up far from the ocean near Denver, Colorado, and had a baseball scholarship from a college in Kansas. But after a trip to Belize during his senior year of high school, Bauer was diagnosed with a serious bacterial infection that cut short his budding baseball career. 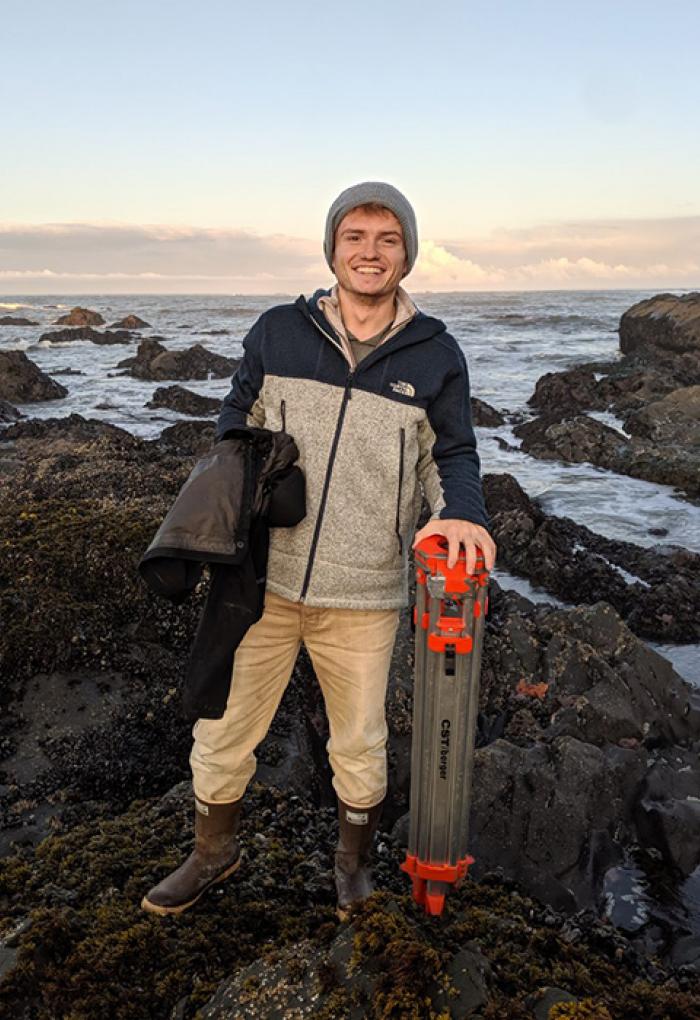 Biology senior Kris Bauer with a tripod stand for a laser level, which is used to survey where projects are in relation to one another and the incoming tide.

During his first year at OSU, Bauer started inquiring about internship opportunities. A biology advisor invited him to attend an undergraduate research meeting where Bauer heard Gravem discuss research opportunities with a sea star project. Bauer dived in.

“I had no idea what a sea star was. My only reference was from watching Sponge Bob on TV,” Bauer remarked. “Once I got out working in the field and in the lab, I fell in love with the research.”

Thus, he became involved in one of the most significant environmental research projects at OSU — a study of the devastating sea star disease outbreak on the Pacific Coast. Working in Menge and Assistant Biology Professor Felipe Barreto’s Labs, Bauer assisted in the genetic analysis of sea stars to study their genetic resistance to sea star wasting disease. He witnessed first-hand the value of research.

“I saw the impact that our research was having on understanding the effects of climate change on marine ecosystems and fisheries in Oregon. I saw that as something bigger than myself that I wanted to be a part of,” said Bauer.

Bauer has emerged as a well-rounded scientist, having engaged extensively in both field and lab research in the labs of Menge and Barreto. “I had zero experience working in a science lab. Both of them taught me how to be a scientist,” said Bauer whose experiences have ranged from scouring field sites at 3 a.m. during low tides to working with different reagents and computer programs in the lab.

“The opportunity to work in the field helped me answer difficult questions about my project, and I am grateful for that.”

While Bauer has several achievements to his credit, perhaps the most striking is his published research on an intertidal predator with Barreto in the journal Marine Biology. When asked about the secret behind his impressive research accomplishments even as an undergraduate student, Bauer says the answer is a simple one: “I have just shown up for everything that I have been interested in, or that I have been invited to. And that has gotten me this far.”

The Alexei Lubchenco Menge Fellowship has been rewarding and meaningful for Bauer in more ways than one. His research experiences have helped him develop from an indifferent student to a passionate young scientist who loves to learn and teach. The fellowship helped him develop his scientific skills by enabling Bauer to conduct an independent research project.

To be at the position, where I had an idea for a project, built a protocol, deployed a field experiment and then actually obtained a cool result from it — that’s something that I’m incredibly proud of,” shared Bauer. “I had the opportunity to be in the ecosystem that I am studying and observe in real-time the natural phenomena that are occurring. The opportunity to work in the field helped me answer difficult questions about my project, and I am grateful for that.”

The fellowship is possible thanks to the generosity of an anonymous donor and the friends and family of Alexei Lubchenco Menge, the son of Distinguished Professors of Integrative Biology Bruce Menge and Jane Lubchenco. Alexei died at age 27 in 2006. A natural athlete, artist and charismatic leader, he loved field biology and being in, on or near the water. He was fortunate to assist with marine research in the Bahamas, Baja California, Oregon, New Zealand, Arizona and beyond in a life cut short too soon.