Dungeness crab is Oregon’s leading commercial seafood product, bringing in an estimated $75 million in 2018, yet little is known about how far crabs will venture in search of food.

Marine ecologist Sarah Henkel is hoping to change that. Last year, she and a colleague from the National Oceanic and Atmospheric Administration glued acoustic tags onto several legal-sized Dungeness crabs near the mouth of the Columbia River and off Cape Falcon, then deployed acoustic receivers north and south of the two locations to learn more about their movements.

Their goal was to learn how frequently and how far crabs move in sandy versus rocky habitat – data that will help inform decision-making on potential impacts of wave energy testing and marine reserves.

What they found out about the crabs surprised them. What they discovered about great white sharks in Oregon waters from listening for the signals emitted from the crab tags intrigued them even more.

First, about the crabs. The researchers deployed 10 tagged crabs in sandy habitat near the Columbia and they all fled the region within a week, taking with them the tags that cost $300 apiece. Crabbers usually target sandy areas for deploying pots because they are less likely to get tangled on the seafloor.

“It’s interesting because I’ve done a lot of sampling of benthic habitat and there just isn’t a lot of food down there,” said Henkel, who works out of OSU’s Hatfield Marine Science Center in Newport. “There’s usually only very small worms and clams, yet there’s an enormous crab harvest each year and most of that is from sandy-bottomed regions.” 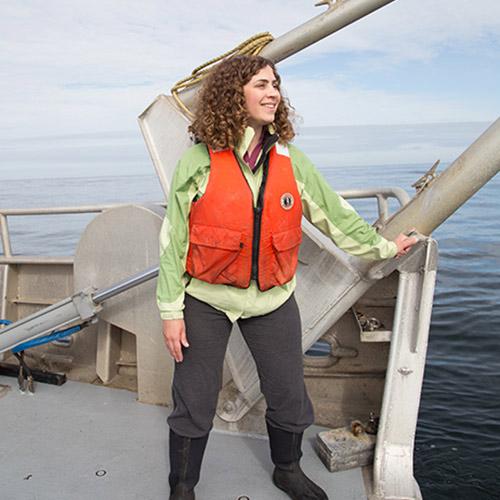 So Henkel tagged an additional 20 crabs and dropped them into the water near Cape Falcon, which has rockier habitat and is about 10 miles south of Cannon Beach on the Oregon coast. Only four of those crabs left the region right away, while the other 16 stayed an average of 25.5 days. One stayed for 117 days, she noted.

“Even though it’s a small sample size, it’s clear that habitat can influence crab movement,” Henkel said. “The crabs in the rocky areas had more to eat, but they often also have mossy bellies, which may not be as desirable commercially. Commercial crabbers like to target migrating crabs in sandy areas that tend to have smooth bellies.”

Henkel’s theory is that Dungeness crabs may travel far and wide in search of food, and when they find it, they’ll stay put.

“We heard from a fisherman who caught one of our tagged crabs in 70 meters of water near Astoria Canyon, who then let the crab go,” Henkel said. “A few days later, another crabber caught the same crab in Grays Harbor, Washington.”

Studies by Henkel and others have shown that Dungeness crabs will range an average of 11.5 miles, and some extend that range to more than 50 miles. Research has also shown that crabs don’t seem fazed by power lines or cables on the seafloor that may transmit wave energy or are used for telecommunications.

Now about those other signals: While listening for crabs, Henkel and her colleagues picked up some other signals from transmitters. When they contacted other researchers, they learned that 35 of the acoustic “pings” came from green sturgeon that had been tagged for other studies.

“The great white sharks were tagged in northern California and we detected them – up here in December and January,” Henkel said. “They were very close to shore, which is interesting. In the three years we had acoustic receivers at a site about seven miles off the coast near Newport, we never detected a single shark.”