Research using time-lapse photography in the Galapagos Marine Reserve suggests the presence of a key multilevel "trophic cascade" involving top-and mid-level predators as well as urchins and algae. Mark Novak, assistant professor of integrative biology, did the statistical modeling to determine what factors could slow the rate of triggerfish predation on pencil urchins.

The findings are important because they include detailed information about interactions in a complex food web. Such information is crucial to knowing how to cause, prevent or reverse population changes within the web.

In the rocky, species-rich subtidal area off the Galapagos Islands, scientists from Oregon State University and Brown University examined the relationships among predatory fishes, urchins, the algae that the urchins graze on, and how the interactions among them were influenced by sea lions and sharks at the top of the food chain.

The key question: Do predators high up in the chain affect the abundance of the “primary producers” at the bottom – in this case algae – thus causing a trophic cascade?

Trophic level refers to a species’ position in the chain, and the cascade describes the series of effects that can occur.

Using GoPro cameras, the researchers made a number of key findings regarding triggerfish, Spanish hogfish, pencil urchins, the larger green urchins and algae, including: 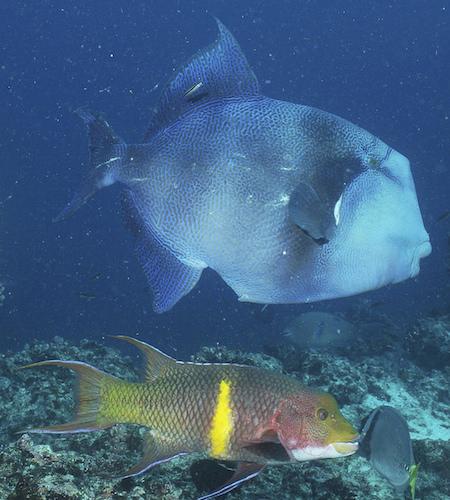 A triggerfish, above, and Spanish hogfish. Photo by Jon Witman, Brown University.

Novak noted that historically, ecologists believed complex food webs typical of the tropics were more immune to trophic cascades than the simpler food webs of higher latitudes; the Galapagos straddle the equator.

Studies such as this one now suggest that is not the case, and that the dynamics of complex food webs can be as predictable as simpler ones provided you understand who the relevant players are.

“When the backbone of the system is strong, you can connect the top of the food chain to the bottom despite all of the indirect effects and the complexities of the system,” said Novak.

“It’s important to know individual species identity when you’ve got a suite of consumers,” Novak said. “The hogfish, the triggerfish, they all feed on very similar things, yet one of the two is most important, the one that drove that first link. And an urchin isn’t just an urchin – one was more immune to consumption from triggerfish, the other more susceptible. And one urchin was important for grazing, and another was not.”

Merely lumping species together at trophic levels would have caused researchers to miss a lot of the subtleties that the photographic study uncovered.

“If you just put urchins out and see how quickly they disappear, you can’t attribute that to any given predator,” Novak said. “We were able to identify those species that were responsible for transmitting the cascade.”

Findings were recently published in PLOS One. The National Science Foundation supported this research.