Stan Cates (Zoology ’20) is one of two College of Science students and alumni to receive the 2022-2023 Fulbright U.S. Student Award. The award will take him to northern Norway to study Arctic and Marine Biology at the University of Tromsø.

Cates said he’s still in a bit of shock about winning the Fulbright. “In my mind, I’m just some guy from some small town in Oregon.”

Choosing his own path

Cates grew up in Cottage Grove, just south of Eugene, Oregon. His interest in zoology and conservation started early on, watching wildlife TV programs with David Attenborough and Jeff Corwin. “I was lucky enough that even though I grew up in a small town, they had recently built a brand-new high school,” he said. “Right as I entered high school, the programs got revamped, and they taught real science and talked about real issues.”

Although he was interested in science, Cates grew up in a context that did not prioritize intellectual development or the application of science to global problems.After high school, he went on to tech school and became a mechanic.

After working as a mechanic for six years, he found himself wanting a change. “I just thought science was way more interesting,” he said. “Plus, I ran into all kinds of attitudes about global climate change, pollution and carbon emissions that were totally nonsensical.” Cates wanted to pursue a different path and contribute to a factual understanding of nature that rationally evaluates how to best conserve its ecosystems. He was also motivated by his desire to be the first person in his family to graduate from a four-year university.

Cates applied to the zoology major at OSU, the only one available in the state of Oregon, and added a minor in fisheries and wildlife.

Succeeding as a non-traditional student

Going back to school as a fully independent student, Cates needed to work full-time to pay rent. Between work, a full course load and research, his schedule was very tight.

Getting a science degree and working full-time requires perseverance, and Cates says it helps to have a strong sense of purpose defined beforehand. “You really have to fall back on your drivers,” to get through, he said. “One of my drivers was, I wanted to be one of the first people in my family to have a college degree.”

Navigating the university’s support systems, Cates often found that they were not set up for students like him. “College is not geared towards students who have to support themselves,” he said. Office hours conflicted with his work schedule, and student healthcare and mental health services were not open during the times he was available.

A community of peers is another vital support system, but how do you make friends with people who are also working full-time? “I definitely knew there were other students like me going through the exact same experiences,” Cates said. “But we couldn’t connect with each other because of those experiences.”

When he did get in touch with student services, Cates found the advice he received did not address his holistic needs as an independent adult. “Everything was oriented around the fact that I was a student,” he said. The discrepancy between his experience of not feeling supported and the university’s message that “everyone belongs here” gave him the impression that he was not welcome and not valued.

“Some kind of peer-to-peer conversation would have been good. If for no other reason, it would just be helpful to hear someone say, ‘Hey man, this feels awful because it is.’”

His advice to them is to “make every attempt to form relationships with your peers, realizing that your peer is not necessarily the 19-year-old sitting next to you in class. They may be peers in one aspect, but not others. They don’t necessarily know what you’ve got going on.”

Through the difficult experience of navigating university systems that didn’t fit, Cates found a consistent ally and friend in his advisor, Jen Olarra, now associate director of undergraduate student recruitment for the College of Science.

“I don’t think I’ve ever had a student who overcame as much as Stan did to get his degree,” Olarra said.

Cates did not start college intending to one day become a Fulbright scholar. In fact, he initially thought that going abroad would not be possible for him, due to his full-time schedule and the priority he placed on professionalism.

“I cannot go to my boss and tell him I want to go to Australia for six months and expect him to be ok with that and have the stability to step right back in and be ok where I was,” he said.

With this context, “start here, go anywhere” seemed like a slogan that excluded him, and he felt frustrated. He did want to go abroad — to Norway in particular — but it took some time to figure out how.

Cates shared his thoughts with one of his professors, Jaga Giebultowicz, professor emerita in the Department of Integrative Biology. She told him about the Fulbright program and encouraged him to apply.

Cates found further support in the lab of Michael Blouin, where he worked monitoring the behavior of hatchery-reared steelhead salmon. Graduate student Mia Wrey and postdoctoral researcher Michael Garvin were welcoming and supportive. They wrote Cates letters of recommendation for the Fulbright award.

“When people think about the arctic, they think about vast icescapes and polar bears, certainly a lot of marine life. They don’t necessarily picture the ugly, muddy-looking tundra covered in mosquitos that is kind of plain and boring, not very nice to look at, but there’s actually a lot going on and it’s very important.”

With the Fulbright award, Cates will travel to Norway to pursue a master's degree in biology, specializing in northern populations and ecosystems, at the University of Tromsø. Specifically, he will be studying how behavioral monitoring can be implemented to better understand conservation of the arctic fox.

The species, critically endangered in Norway, had dwindled to a population of 50 individuals by 2000. Since then, captive breeding programs have been established to bolster wild arctic fox populations. To support released captive cohorts, feeding stations are provided. Cates aims to monitor behavior of captive versus wild individuals to help determine the success of captive breeding programs, whether these feeding stations are effective, or whether they create long-term dependence on resources from humans.

Cates reflects on the wildlife films he watched growing up, which often featured iconic, charismatic species like the arctic fox. While that was his initial exposure to zoology, he’s learned as a scientist that wildlife media sometimes sacrifice accuracy for the sake of exciting visuals.

“They only want to talk about what we find aesthetically appealing, which is not necessarily what a healthy ecosystem is,” he said. “When people think about the arctic, they think about vast icescapes and polar bears, certainly a lot of marine life. They don’t necessarily picture the ugly, muddy-looking tundra covered in mosquitos that is kind of plain and boring, not very nice to look at, but there’s actually a lot going on and it’s very important.”

Cates’ mission as a scientist is to bring people back to a holistic, factual understanding of the environment that values research to understand all of its vital, interwoven facets. “We as a species have wandered too far away from nature,” he said. “Ultimately, I’d like to push attitudes to see that the mosquito-infested marsh in the middle of nowhere supports all these other places. We don’t exist in a vacuum.”

As he prepares for his move and reflects on his time at OSU, Cates invites the university to think about how we are supporting students with different college experiences and making sure they feel welcomed.

In 2022, the College of Science has taken a small step toward helping its non-traditional student succeed. A new scholarship fund, called Science for All, is now available to a variety of students with diverse college lifestyle experiences, including those who are over 25, work full-time, are caregivers or have children or are veterans or spouses of active-military members. This fund will empower our students to pursue their educational and career goals, so they too can start here and go anywhere. 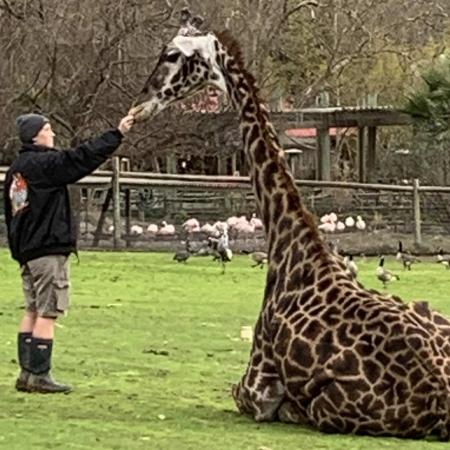 A passion for wildlife conservation: Zoologist takes care of a little bit of Africa