Molly Cordell remained calm when the red river hog pushed against her at feeding time, sniffing her pants pocket. But she admits her surprise when the hog took her pocket between his teeth.

“He, almost gently, grabbed onto it and started walking away,” Cordell says. “And because the hogs are very strong, it pulled the rest of my pants with it.”

Cordell was left to marvel at the quick and painless procedure that left her with one pant leg on, and one pant leg in the mouth of a retreating hog.

A zoology graduate from Oregon State University, Cordell landed an internship at Safari West in Santa Rosa, California, and was hired at the end of the internship. An employee now, Cordell had worked with other pairs of hogs, but it was her first time with these two – and every animal has its own unique personality.

“I was just like, okay, this isn't working, I'm going to leave [the enclosure],” Cordell says, laughing. “He showed me you have to be more firm. You have to stand up for yourself.”

As her manager took over the feeding, Cordell went in search of clothing. “For the rest of the day, I had to wear these awful yellow, almost fishermen yellow, plastic rain overalls. That was all we had. It was hilarious. I went in the next day and I did it the right way, and was able to safely drop their food. They gave me space, and it was completely fine. I had learned my lesson.” 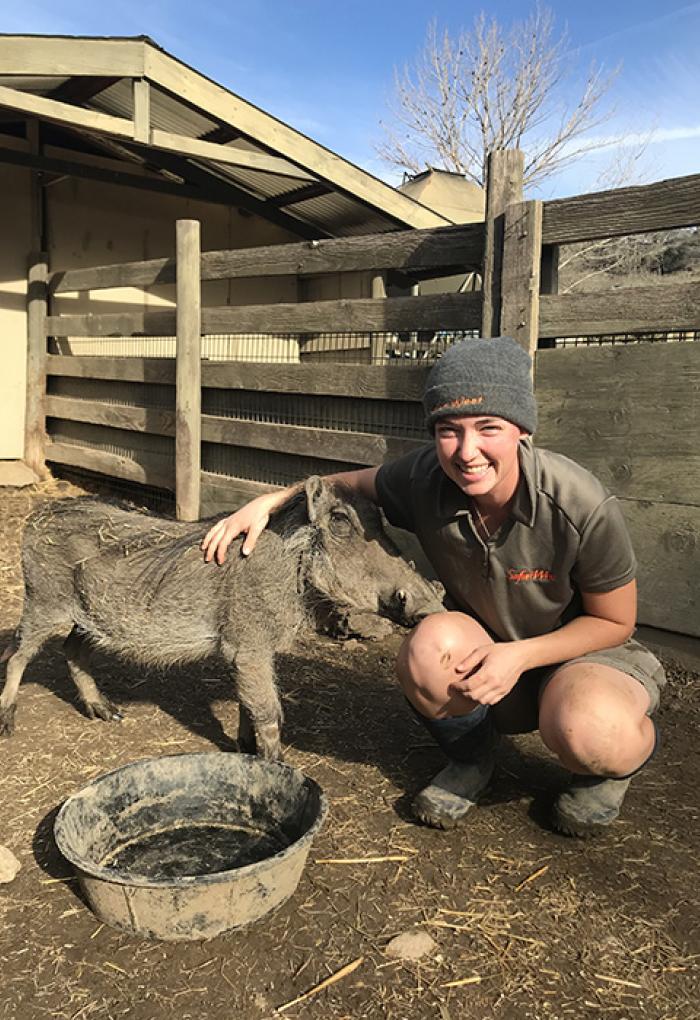 Zoology alumna Molly Cordell with a warthog at Safari West in Santa Rosa, California, where she worked for four years after graduating from Oregon State University.

The college of trial and error

Four years earlier, as Cordell wrapped up high school in Washington, she searched for colleges with a strong zoology program. She’s always loved animals, and family vacations – always outdoors, hiking and camping – fueled her love of nature. But it was her grandpa who planted the idea of working with animals professionally. For a number of years, he volunteered regularly at aquariums.

“I would visit him at the Seattle aquarium when he was volunteering, and he loved it,” Cordell says. “He had so much fun. And I think that probably helped spark that interest.”

Cordell attended the College of Science from 2012 to 2016, serving as an officer in the Integrative Biology Club and on the Student Advisory Committee for the College. While her classes formed a solid foundation for her future profession, her internships helped give Cordell direction.

“I tried a bunch of different things, and that was really helpful,” she says. She interned at Cougar Mountain Zoo in Issaquah, Washington, and at the High Desert Museum in Bend. At OSU, she worked for the general biology lab series, assisting in setting up labs for classes.

“I think college students feel the pressure to know what they want to do, to have this grand plan for the rest of their lives,” she says. “I don’t think you need that. I think college is about trying different things and figuring out what you like and what you don’t like. Applying for everything, trying everything. If you find out something you don’t like, that’s just as valuable as finding out something that you do.”

It wasn’t until Cordell’s junior year that she identified what she was most interested in. This time, a two-month internship took her to Namibia in southern Africa, to the Cheetah Conservation Fund. “I got to work with the cheetahs ... and learn about the different methods they use in their conservation efforts,” she says. “That was an incredible experience and really valuable to help me realize I wanted to be in wildlife conservation. I didn’t just want to work with animals.”

“Apply to absolutely everything, even if you don’t feel qualified for something. But you really want it, apply anyway”

Though she loves to travel, Cordell discovered her contentment rests more on what she is doing, not where she is doing it. As she ventured into various animal-related arenas during college, Jennifer Olarra, her advisor, was her constant encourager. “I swear that woman is a big part of me getting through college,” Cordell says. “She was always available to help. She would listen to what I was interested in and help me figure it out. She didn’t ever make me feel like I couldn’t do what I wanted to do.”

With a friendship that has grown along the journey, Cordell still reaches out to Olarra on occasion for advice.

Cordell moved home after graduation, working at PetSmart, saving money – and sending off application after application. “I was applying to a bunch of different internships and job opportunities,” she says.

“Apply to absolutely everything,” Cordell advises graduates. “Make it clear why you want the job or why you are valuable to them. Having all the necessary qualifications isn’t necessarily going to be a game-changer. So even if you don’t feel qualified for something, but you really want it, apply anyway.”

Six months into her placeholder career at PetSmart, Cordell was accepted to an internship at Safari West in their hoofstock department, working with keepers who take care of large African animals.

“When they asked me about my experience, I told them I didn’t have experience with any of those animals, but that was why I wanted the internship – to gain new experience and expand my own knowledge. And I think that can be really valuable to an employer, admitting you want to learn new things.”

Cordell easily lists 20 animals she worked with at Safari West: wildebeest, gemsbok, nyala, addax, and bongo – not to mention the red river hogs, warthogs, Cape buffalo, and even rhinos. Plus a few birds: ostrich, crane and storks.

Because Safari West uses free contact with their animals – meaning keepers enter animal enclosures to feed and care for the animals, methods of training the animals continually evolve, particularly approaches to feeding that are safe for both the animals and the humans.

Animals under human care often live longer than those in the wild, creating challenges that Cordell and other zoologists resolve with training unique to the issues. Cordell helped train one pair of hogs to step on a scale – one important facet of monitoring the animals’ health – and she helped train giraffes in step-up behavior, to trim their hooves, which do not wear down as quickly as in the wild.

Training the animals, not for tricks but for the sake of keeping the animals healthy and the keepers safe, is what Cordell most enjoyed and considers a large part of her success at Safari West. “If something isn’t working, you don’t try and force it,” she says. “You don’t want to put yourself or the animal in an unsafe situation. You leave and you rethink the situation, and you figure out what might need to work differently.” Training is always a collaborative effort, as she and other workers brainstormed how to solve the challenges.

“The more time we spend with them, the more enriching it is [for the animals], the more they get to use their brains,” she says. “That was really satisfying … a really good feeling, to work toward a behavior like that and see it come to fruition.” 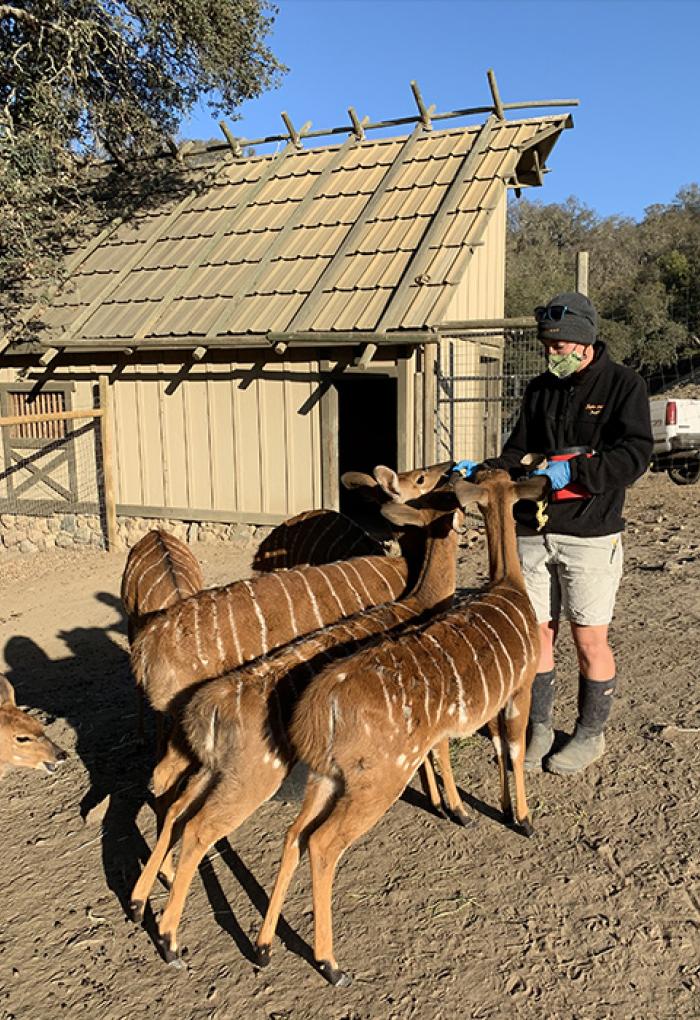 Cordell feeds Nyala antelopes, one of the many species of hoofed mammals she cared for at Safari West.

Master’s degree and beyond

Though Cordell refuses to say goodbye to her hoofstock friends – she still lives nearby and visits frequently – Cordell decided after four years at Safari West that she had learned a lot, but it was time to learn more.

While working toward a master’s degree through Project Dragonfly, an online program out of Miami University in Oxford, Ohio, she is working as a veterinarian technician at a domestic animal practice. “I told them when I applied that I didn’t want to get out of zookeeping, but I wanted to learn new skills and beef up my veterinary knowledge, and then take that back to zookeeping. They were down for that and said, ‘Come work for us and we’ll teach you all the things we can and then we’ll send you off.’

“When I went to OSU, I wanted to get a degree in zoology because I knew I wanted to work with animals. And after working at Safari West for a couple of years, I kind of realized I didn’t just want to work with animals; I wanted to work in wildlife conservation. In what way, I’m not really sure yet. That’s one of the reasons I want to get the master’s degree, because I want to bolster my resume…but also because I’m hoping it will help me explore different options and figure out exactly what I want to do.”