Evolutionary biologist Dee Denver explores the impact on advancing scientific knowledge by continuously applying fresh perspectives. Points of view and cultural knowledge affect how science is done on a fundamental level. So, he wonders, what might he be missing?

Head of the Department of Integrative Biology in the College of Science, Denver unexpectedly found common ground between this pursuit and his study of Buddhist philosophy. A person skeptical of spiritual traditions in earlier years, he accidentally stumbled into his initial acquaintance with Buddhist philosophy. It so happened that the Dalai Lama, a Nobel laureate, was speaking at a Buddhist temple near Indiana University where Denver was doing postdoctoral training in theoretical evolutionary genetics. To his surprise, the concepts he heard in that speech resonated with his analytical mind. He has since adopted Buddhist practices and traveled the world to investigate the connections between Buddhist philosophies and science.

“If we’re constantly thinking about things being dynamic, and we take a step back to re-evaluate, are we making sure we are considering that everything here could change?"

Denver continues to investigate those unexpected intersections, energized further by a Templeton Ideas Challenge Award he received in November. His proposal was one of 50 chosen from a pool of more than 250 ideas. In his $1,000 award-winning application, Denver proposes to “apply a Buddhist analytical lens to Darwinian and neo-Darwinian evolution.” He anticipates the project will lead to a second book project. His first book, “The Dharma in DNA,” is under contract with Oxford University Press and expected to be published in December 2021.

There are many critical questions Denver proposed to explore for the Templeton award. For example, how might the Buddhist philosophy of impermanence impart new insights into Darwin’s theory of evolution? Could Eastern understandings and framings of interdependence alter evolutionary theory’s reliance on “self” concepts? And how might the practices and approaches to wellness that Buddhism encourages lead to better science?

Stepping outside of the self

Change and interdependence are core tenets of Buddhism with over two millennia of theoretical development, explains Denver. These and other Eastern ideas could offer significant contributions to the principles of evolutionary biology. Addressing foundational errors in the Western scientific tradition may even alter “the definition of life as a self-sustaining system capable of Darwinian evolution,” his proposal suggests.

“If everything everywhere is always changing all the time, then what is this ‘self’ thing that we are talking about?” Denver asks. “If we’re constantly thinking about things being dynamic, and we take a step back to re-evaluate, are we making sure we are considering that everything here could change? Where might we be thinking about something in too concrete of a way?”

For the Templeton study, Denver will identify how adhering to “self” concepts – byproducts of broader Western thought and culture – compromise central biological theories. Foundational texts from diverse Buddhist traditions will serve as primary sources for describing the “self” attributes in biology that Buddhism claims are false or misleading. The research will conclude with a reconsideration of life as an impermanent and interdependent, rather than a “self-sufficient” system capable of Darwinian evolution. Finally, he will reflect on the consequences of reframing life in this way.

“The angle, perhaps in simple words, is exploring unexpected intersections and harmonies between Buddhism and science – the commonalities in Buddhist and scientific outlooks on the way things are,” he said.

Advancing concepts of ‘what life is’

The John Templeton Foundation explains the award's goals: “The Ideas Challenge is aimed at exploring novel theoretical, philosophical, or scientific ideas useful for advancing the study of goal-directed, goal-seeking, or goal-suited phenomena in nature. We invite bold thinking that asks how such exploration might open new avenues for inquiry.”

Ultimately, the foundation aims to investigate how science might be harnessed to understand the deepest and most perplexing questions facing humankind. This goal is a natural fit for Denver. At OSU, he has led a highly successful and dynamic research program on the evolution and genomics of many forms of life, including nematodes. The intersections of Buddhist and scientific thought are a prominent and growing part of the Denver Lab environment. And for this research, he has traveled and interacted with Buddhist communities in China, India, Sri Lanka and Hawaii.

The Denver Lab’s Bodhi Tree Project, funded by the Khyentse Foundation, analyzes the genetic history and evolution of Bodhi trees, Ficus religiosa – a tree considered sacred in Buddhism. Scientists in the Denver Lab are investigating claims that a lineage of the tree still exists that descends from the original tree under which the Buddha sat – thus far, with encouraging results. 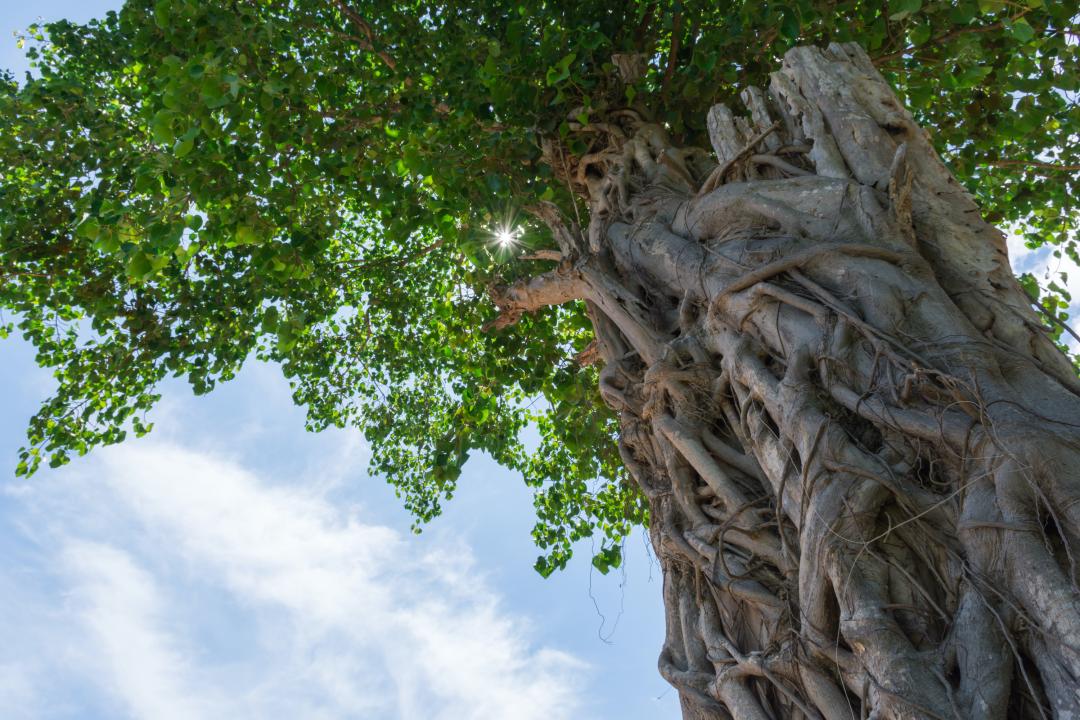 The Denver Lab has been awarded $7.8 million of funding since 2013 by agencies such as the National Science Foundation, the National Institutes of Health, the U.S. Department of Agriculture and other federal and state agencies. Denver has published more than 60 peer-reviewed articles, including scholarship in highly ranked journals such as Science, Nature, PNAS, Nature Genetics and Genetics.

Denver understands the discomfort some scientists have with connecting science and religion or spirituality – a concern he attributes largely to the contrary relationship between science and religion in the West. “I was trained as an evolutionary biologist, and this is the sort of biological discipline or scientific discipline that is at that flashpoint – creationism in Christianity vs. Darwinian evolution,” he said.

"This idea that everything's in conflict isn’t quite accurate.”

“Another approach, which has been more contentious, is to take the view that the nature of things and how life works do indeed have common concerns – and this is where you enter into conflict. A person who ascribes to this approach is Richard Dawkins, a former Oxford professor. He is probably the most vocal atheist on the planet. He is very negative toward religion and condescending toward those who practice it.”

But the idea that evolutionary theory presents a direct threat to religious beliefs has emerged in response to Western understandings of the way the life works, Denver explained.

“The truth is, there are some spiritual, or sometimes religious traditions, that actually have quite a bit in common with science,” he said. “Many don't know that because of history, because they’ve not encountered one another very much. I think there’s this assumption that they're not going to work well together. But when you look at it with fresh eyes, which a number of folks are doing now, in particular with Buddhism, it’s surprising. There are a lot of parallels here. To me, that's exciting.

“There are millions of Buddhists on the planet, and their worldview, or approach to things, has many features in common with our Western secular science way of being. I think there’s value in that, something that deserves further exploration. This idea that everything's in conflict isn’t quite accurate.”

One important value of this research is its receptiveness to different cultural perspectives to scientific theory. Fostering diversity, equity and inclusion is a key priority of the Denver Lab, and it prioritizes diversity across many fronts – including different ways of thinking and approaches to understanding.

“Maybe we’ve been too dismissive of these differing way of thinking and understanding in the past because they’re not part of our White world,” he said. “This offers a different lens. Buddhism values looking critically at the subject-object interdependence, meaning how one looks matters, and different people might see things a different way.

“One biological example is color blindness. Someone who is color blind literally sees things differently than somebody who is not color blind. So, you have different lenses, literally, but you can extrapolate this to different cultural contexts, different ways of being.”

Denver looks forward to delving deeper into the harmonies between science and Buddhism. Naturally, he has already discovered notable commonalities, such as “valuing direct experience, that’s a point of common concern,” he said. “Another big one is that Buddhism says things should only be believed if they're tested for the truth. It's like, oh wow, you’ve got to be kidding me. That’s science.”